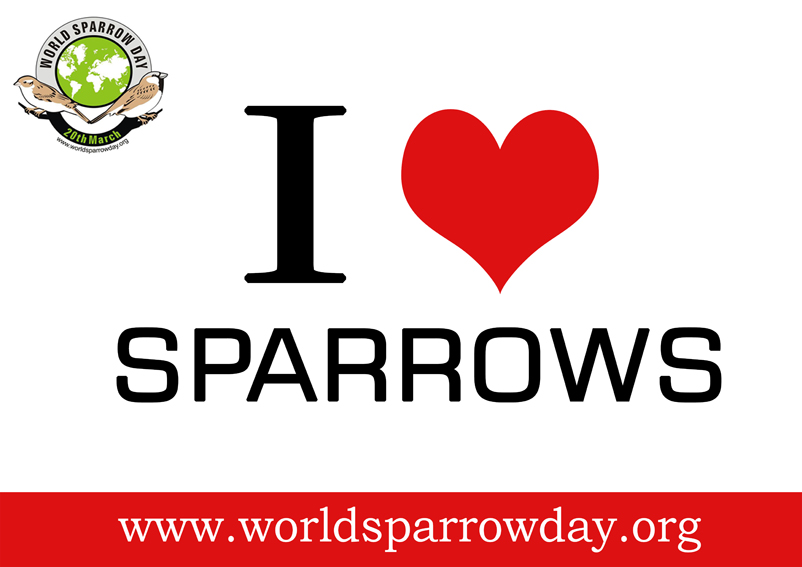 The diminutive house sparrow (Passer domesticus) is perhaps one of the earliest birds you can remember from your childhood. Their nests dotted almost every house in the neighbourhood as well as public places like bus bays and railway stations, where they lived in colonies and survived on food grains and tiny worms. Many bird watchers and ornithologists recall with fondness how the house sparrow gave flight to their passion for observing birds. The association between humans and the house sparrow dates back to several centuries and no other bird has been associated with humans on a daily basis like the house sparrow. It is a bird that evokes fond memories and has thus found mention in folklore and songs from time immemorial.

Unfortunately, the house sparrow is now a disappearing species. But like all other plants and animals which were once abundant and are now facing an uncertain future, their numbers are also declining across their natural range. The reasons? Certainly, there is no one single reason for the decline of house sparrow. Its slow but noticeable disappearance has been labeled as one of the biggest mysteries of recent times. A leading newspaper in the United Kingdom – a country that has witnessed one of the biggest declines of the house sparrow population in recent times – declared a cash prize to anyone who could solve the mystery. Needless to add, the reward lies unclaimed.

The house sparrow is believed to be declining for various reasons ranging from the destruction of its habitat to lack of insect food for the young and even the increasing microwave pollution from mobile phone towers.

The idea of celebrating World Sparrow Day came up during an informal discussion over tea at the Nature Forever Society’s office. This caught our fancy for its potential to make a positive difference to the fate of the House Sparrow and we started working upon it. The idea was to earmark a day for the House Sparrow to convey the message of conservation of the House Sparrow and other common birds and also mark a day of celebration to appreciate the beauty of the common biodiversity which we take so much for granted. Nature, we must understand, does not come with a lifetime guarantee.

World Sparrow Day also has a broader vision to provide a platform where people who are working on the conservation of the House Sparrow and other common birds can network, collaborate and exchange conservation ideas which will lead to better science and improved results. It aims to provide a meeting ground for people from different parts of the world to come together and form a force that can play an important role in advocacy and in spreading the awareness on the need of conserving common biodiversity or species of lower conservation status.

The sparrow, especially the common house sparrow, is one of the most ubiquitous birds on earth and is also one of the oldest companions of human beings. It has, over a period of time, evolved with us. Fortunately, they are still found in abundance in many parts of the world.

The house sparrow was once the most common bird in the world, but in the past few years, this bird has been on the decline over much of its natural range, both in the urban and rural habitats. The decline of the house sparrow is an indicator of the continuous degradation the environment around us is facing. It is also a warning bell that alerts us about the possible detrimental effects on our health and wellbeing. We need to know the health risks of the increasing amount of microwave pollution and what is decimating the population of the house sparrow, which co-existed with us, so that we can estimate the effect on all forms of life, including ours.

The house sparrow also represents many of the common bird species and is, in a sense, their ambassador. Therefore, the conservation of the house sparrow and its habitat will also help save much of the common biodiversity, which shares the habitat of the house sparrows. This website will offer an overview of the World Sparrow Day events being held all across the globe. Individuals and organisations can register with us so that we can showcase their events. The goal is to collectively inspire others to join the celebrations and to get as many people as possible involved in the conservation of house sparrows and their habitat across the planet.

The rationale for celebrating World Sparrow Day is not only to commemorate the event for a day but to use it as a platform to underscore the need to conserve sparrows as well as the urban biodiversity. We hope the event will bring together individuals, national and international groups. It will also help in attracting the attention of government agencies and the scientific community to take notice of the need for the conservation of the common bird species and urban biodiversity.