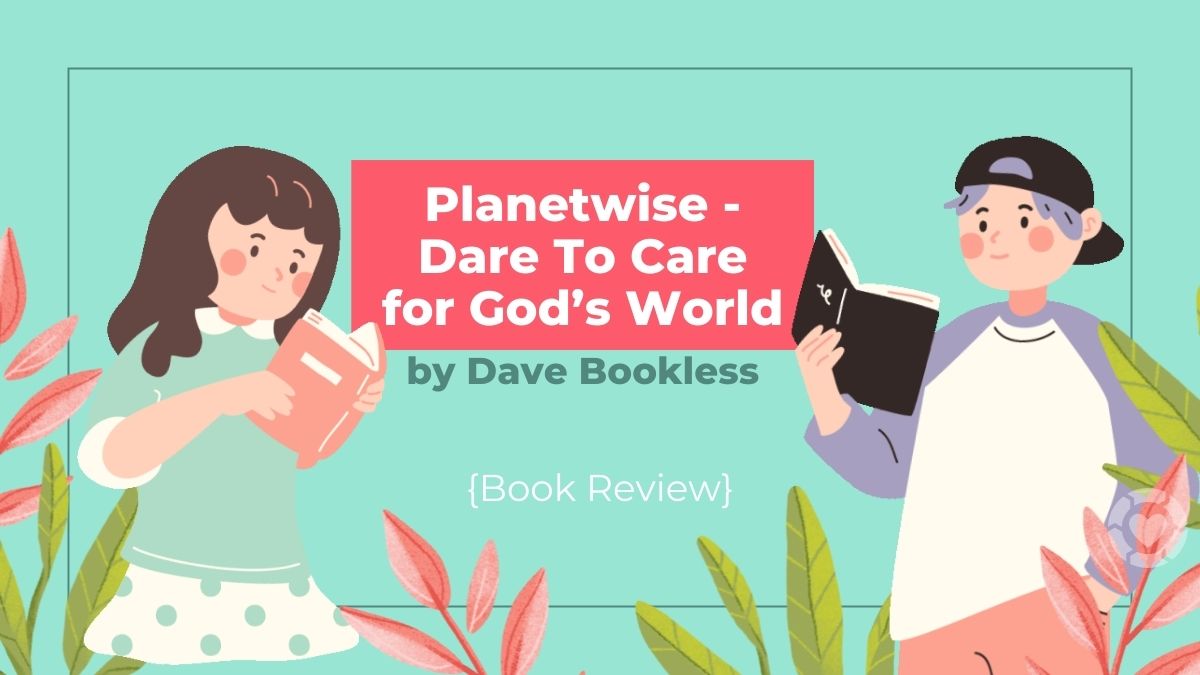 I am concerned about the climate crisis and I am trying to live more sustainably. Also, I am a Christian and I believe in God. And the reason I read this book was the question: are these two separate areas of my life or is there a connection, or even an overlap, between them?

So far, Christianity and sustainability looked like two separate areas to me. In environmentalist circles, God and faith are never mentioned. Although, sometimes there is a spiritual dimension to it – some meetings feel like a bible group.

And in church sustainability was never a topic. Until just recently, when my church organized a camp meeting about sustainability. Christian charities have long been involved in disaster relief and development aid and now they are also getting into the topic of the effects of the climate crisis – you can help only so much and it would be even better if the root cause of many problems is addressed, i.e. climate change.

Among the books recommended during this camp meeting was “Planetwise – Dare To Care for God’s World” by Dave Bookless, which is addressing exactly the question: What do Christianity and sustainability have to do with each other?

Well, turns out faith and sustainability have a lot to do with each other.

Dave Bookless begins right away by explaining why Christians should care also about the environment. Environmental issues are not irrelevant for us because “this earth is our God-given home and the Creator cares about his house-guests’ behaviour.”

The first chapter starts at the beginning: creation. God is revealing himself through the bible but also through nature. And God didn’t stop there but is still committed to the creation and still claims it as his property. We, humans, are a part of this creation and, as explained in chapter 2, there was a triangle of perfect harmony between God, humanity and the rest of creation. This harmony was destroyed and humanity became disconnected from nature and people lost touch with the land they are living on.

One passage in this book is quite crucial:

Why? Because we need to change our behaviour, our mindset and our attitude. As Dave Bookless points out: even if we could make all the pollution and CO2 go away, it would just start to accumulate again – unless we change our attitude towards nature and treat it better than we do now. It’s also the message from the book “The day the world stopped shopping”. We need more than just capturing CO2 directly from the air – we need to stop putting it there in the first place.

Did you know that there are 2.000 references in the Old Testament and 250 in the New Testament? It shows that it’s important. There are many little hints hidden in the bible that God wants us to live in an eco-friendly way; for example, did you know that he gave the old Israelites a law to let the land rest every 7 years?

As explained in chapter 3, we belong to the land and the land belongs to God. So the land provides the context for our relationship with God and acts in the bible as a spiritual barometer. The broken relationship between God and humanity also affected nature and the land suffered, too, as people started to abuse it out of greed.

Chapter 4 talks about Jesus who, being a part of the trinity, was involved in the creation, sustains it and was sent here to be its saviour. But how does he want to save it? There is talk in the bible about a new creation … so, why does the earth we are living on right now still matter?

Bookless explains in chapter 5 that God wants to save all of creation – humanity and nature – to restore the perfect harmony from the beginning. And he explains that God will do this by renewing the earth, i.e. by purifying it but not destroying it and making it from scratch.

Until here the book is focused on theology and explaining, why faith and sustainability are connected. From chapter 6 on it becomes practical. If God cares about creation and I, as a Christian, am trying to be an image of him: how do I do that? In chapter 7, he spells it out as…

This means that our lifestyle should look like creation matters. Bookless points out in chapter 8 that this can be a long journey. We are talking years here; so, going 100% green won’t happen within a week or so. How do we get there? “One step at a time,” Bookless writes.

Start with just one thing in your life and build it up from there. Maybe start with what you eat, then where you could reduce waste and eventually start travelling ethically. This journey took Bookless a decade and is still not finished. I found this very encouraging and a refreshing contrast to e.g. books, where a zero-waster just shows you the end result – that can be very frustrating and it’s great that Bookless stresses the fact that it is a long journey, not a sprint. So, no worries – it’s normal if it takes a while to get the hang of it.

Last but not least, chapter 9 clarifies that Bookless doesn’t want all churches now to stop preaching the gospel on Sundays and just join Fridays for Future. Living sustainably is part of being a Christian, however, it is only a part and not the sole focus. Being a Christian is still about fellowship in church and telling others about Jesus.

Love your neighbour in a global world means that we should care about the people that are affected by our lifestyle. If you love your neighbour, how can you wear clothes made by an underpaid factory worker in Bangladesh? And shouldn’t you care about fellow humans mining the minerals for your new smartphone?

This should be more of a topic in church and hopefully, it will become normal that becoming a Christian means caring about other people as well as caring about nature.

Maybe you are not a Christian and you don’t believe in God. Maybe you even blame Christianity for exploiting nature (which – believe me – is most certainly not what God wanted his followers to do). But I hope we can agree on this: We need to change and respect nature as well as each other more. And christians should do that, don’t they?

“How To Avoid A Climate Disaster” by Bill Gates [Review]

“The Day the World Stops Shopping” by J.B. Mackinnon [Review]